9 Outrageous Lies Your Long Distance Boyfriend Will Tell You 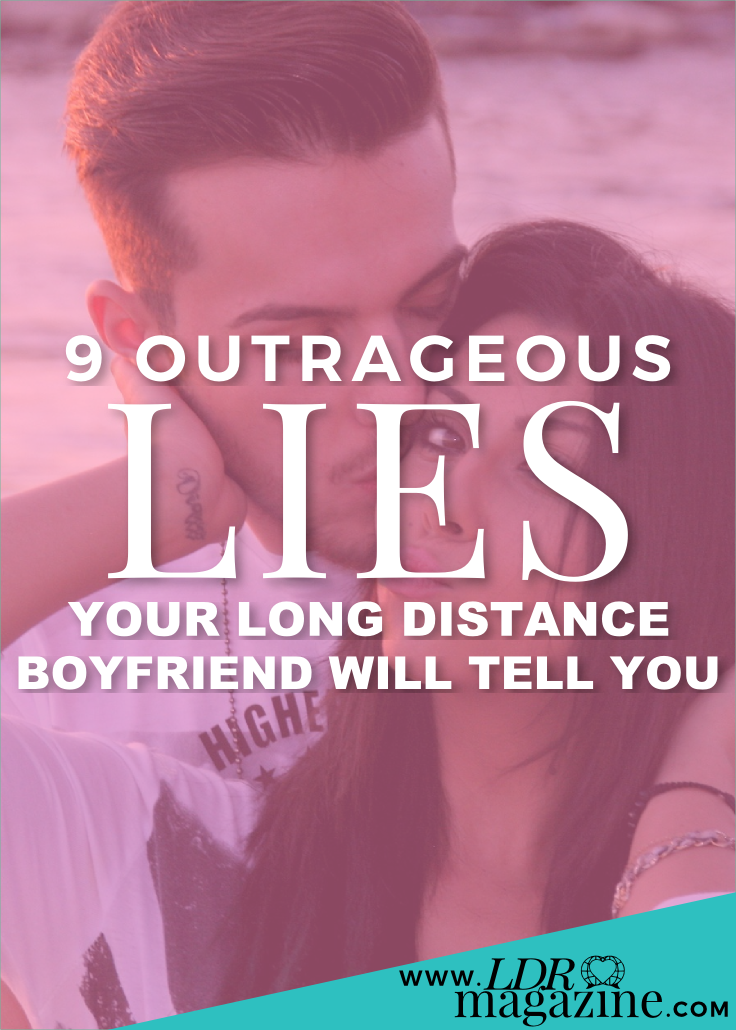 What’s a good way to distinguish the good guys from the players? Track down their lies.

In a long distance relationship, everything is about trust. If you fuel your relationship with lies, that trust will rust and break down any amount of love you feel for each other. While this article is about guys, both men and women have openly admitted to lying to their partners in their relationship. In fact there have been numerous studies about the extent that couples will lie to each other just to keep things calm in a close-distance relationship.

So what about LDR couples? What lies are long distance boyfriends feeding their partners to keep them calm and unsuspecting from thousands of miles away? And do any of the items on this list remind you of YOUR boyfriend? Let’s find out.

Here is what we would categorize as the 8 most frequently repeated lies that long distance boyfriends will tell their girlfriends.

1. I don’t notice other girls

Attraction is a natural part of the human experience. If your boyfriend tells you he doesn’t notice other girls -he’s lying. Can you honestly say you’ve never had a really cute guy catch YOUR eye? Nope, didn’t think so.

Attraction is normal, it’s how we’re wired. But as I always say, just because you’re attracted to someone doesn’t mean you have to act on that attraction. People tend to confuse attraction with cheating with your eyes, and maybe that’s why men lie about it, but the truth is everyone is attracted to someone besides their partner -even if they say they aren’t.

If you and your boyfriend have a standing arrangement for a video chat or a phone call and he doesn’t show, that’s a big fat red flag. As your boyfriend, it’s kind of his job to make sure that he remembers those important things -namely, plans with YOU. If he’s losing track of time he’s either lying or doesn’t value you as a girlfriend enough to remember. And that’s something to be concerned about.

If appearances meant nothing, your boyfriend would never have found you attractive. Appearances don’t mean everything but they mean an awful lot. Our first decision to approach someone is based on how they look because before that point, we usually know absolutely nothing about them other than what we see at first glance.

(Even if the first time you “meet” is through a webcam, all the personality in the world might not be enough to keep your guy interested if he’s not physically attracted to you.)

We are all visual creatures, and appearances can either turn us on or put us off. But men are especially wired to like what they see. Science even backs this fact. If your guy tells you appearances don’t matter, hes definitely lying to get on your good side.

Some guys feel like admitting they are angry or jealous is, in a sense, some kind of a defeat. But everyone gets angry and everyone will at some point in their life experience a tinge of jealousy. In fact, if your boyfriend really cares about you, he WILL get jealous from time to time. Especially being so far away from you! Maybe not the soul crushing, murderous jealousy you see in movies -but a small feeling of worry, anger or discomfort is totally normal & there’s nothing wrong with admitting it.

If there’s another mystery girl in your man’s life and he’s claiming he has no idea why she’s bothering him, but your intuition says something different -listen to it! It takes two to tango and two to text. If a girl is endlessly texting your guy and he’s complaining about it and claiming not to know why, just remember that simply ignoring her would easily end the contact after a while. If she has your boyfriend’s number, he probably gave it to her. And if after months or weeks of him complaining she won’t stop texting -face it: he’s texting her back.

6. I would never lie to you

Do we really need to explain this one? Guys will lie about lying just to keep you from thinking they are lying. Everyone lies, even the little ones where you say “no its fine” or “No, I’m okay” when you’re not. If he says he’d never lie to you, he’s trying to gain your trust because he’s probably lying about something right now.

You’ve been in a relationship with your guy for a while, and you know who his regular friend group is and what his usual routine should be. Then, suddenly, a new girl enters his life and they spend an unusual amount of time together. Their photos together on social media make you uncomfortable and you’d swear she has a mad crush on him but every time you ask.. “Oh, her? We’re just friends.”

They’re not. Follow your intuition because it’s usually always right. Why does he suddenly spend all his time with this new female friend, when he was perfectly content without her before? There is at least a 50 percent chance that this man is cheating on you. You can believe they’re just friends if you like, but the only “friendship” they’re sharing is the one he should be having with you.

8. I’m going to break up with her soon

An anonymous woman sent in an advice request about her long distance relationship with a married man. He and his wife had divorced, but he and his ex-wife still lived together with their kids. She was tormented by the fact that he had promised to move out of the house soon, so they could begin making steps to be together. But after 3 years it hadn’t happened yet and she was getting worried.

How she let that go on for 3 years, we’ll never know, but it was very clear to us that he was still married and still with his wife. Our worried reader? She was just a side girl and had no idea. Ladies, if a guy is going to end a relationship with someone, he won’t do it soon -he’d have done it before he met you or the minute he realized you were the one. As long as you believe that promise, you let yourself play victim to someone who is only using you.

9. I’ve been dealing with things

If your long distance guy has been absent, or distant from you he might simply be pulling away (or worse, cheating.) When you truly love someone, they are the one you go to when you need comfort. You don’t pull away, you seek them for support because you know they’ll be there.

Disappearing or going dark in a long distance relationship is a red flag in ANY situation, but most especially if they use the excuse that they are dealing with things. If he’s dealing with anything, it might be another secret life you don’t know about or simply spending time with another woman that isn’t you.

20 Couples Who Succesfully Closed the Distance

How To Overcome Online Arguments in an LDR

Appearances may matter, but the important thing and the truth is that beauty is in the eye of the beholder. There can be some traits that are seen universally beautiful, but this doesn’t mean that all men like skinny girls with big busts and blonde hair nor does it mean that all women are into muscle and tousled surfer hair 🙂 I think this is what some people mean when they say that ‘appearances don’t matter’ – and also once you fall in love you get kind of blind and don’t really care about the changes that happen in someone’s body. So… They matter when it comes to selection but the way of seeing beauty starts to change when we fall in love.

I don’t know if my comment makes ANY sense, probably not, but I just wanted to let ma voice out there!

What if your LD bf says almost a month ago he was moving closer to you and yet since he’s been an hour from you he never shows. Tells you everyday he’s coming but never shows stuff is always coming up and every time you go to end it he breaks you down and gets you back…everyday I waited and every day I was let down.

if he cared enough he would show, i am sorry. But if someone cares they make the time and don’t flake. Nicki let him go you deserve better someone who will make you a priority, Yes things come up but all the time i don’t think so. Godlike.

i have a long distance relationship, I’m a female from Norway and my boyfriend lives in China, he has already met my family in video chat, he told me he lives in a different town than than his family because of work, so I asked if I could see a picture of his mom, but he says he has no family pictures, so I asked if I could perhaps meet his family on video chat next time he is home, and he said no, that they prefer to meet in real? and I dont know what to believe, I get this gut feeling like he is lying to me about something, he also won’t show me his room even tho I showed mine. he seems to lie about small things, should I believe in him? 😮