Hi there! my name is Jennifer and my boyfriend’s name is Davy. We are both in our mid 20’s, I am 22 and Davy is 21, we are eight months apart and happily dating for almost six years. This January will be our six months. Now I live in California going to school full time, while Davy on the other hand is in U.S. Navy in Florida. There are 254 miles between us.

We both met at the same high school we were both attending, we had one class together at that time we had another one, but Davy decided to drop that class and had decide to take Art. Now we are year apart, so I would be a sophomore when Davy was a freshman. And knowing that we would be in different grades which more harder which I wish we had more classes together.

Later on he gave me his Myspace, but during Christmas break he never logged on Myspace, so I thought to myself “aw he is never getting on my Christmas is so boring.” Once school was back in session I told him that I was waiting all break for him to be on Myspace, so that is when he told me he never gets on he is mainly on the computer for gaming, So I thought oh okay he is a gamer. 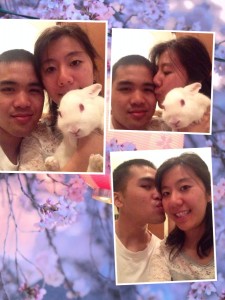 Fast forward, three years later I had decided I would ask him out to be my boyfriend my senior and he said yes. He was extremely shy which I wish he asked me to be his girlfriend but I made the move. So when Davy was a senior and my freshman year of college something terrible happened, I won’t go any depth but something happened to my family and Davy and I weren’t talking to each other due to some issues.

So when Davy was a freshman in college it was my second year, I was surprised, because I thought he would end up going to another university. He ended up coming to the college to spend time with me, and what is sweeter and touching was he decided to put off going to the Navy and be with me. That really made my heart smile, because even though our love was like a roller coaster he always put me first on top of his list and he never gave up on me. Now that is a true man I believe and people I do quote this quote for a fact. “If you love someone, don’t give up on them.”

In March of 2014, Davy went off boot camp and this was the hardest thing for us, because we never pictured distance together.

How Being Long Distance Has Helped Shape Our Relationship

Honestly, I am so thankful for this time that we are busy focusing on what we want in our lives right now. He is such a hardworking man and he has all the potential quality that I look for in a man and I am so blessed that God has given me this man to be my best friend, boyfriend, and soon to be husband.

As for me I am so busy extremely with school since I transferred from a community college to an university I will be taking much more units next semester, but the distance has built not only our relationship it has built us more stronger towards each other so I am grateful for everything that we put into our daily lives.

Both of our families respect our decisions being in a long distance. And we both know if we can’t rely on them we can always rely on each other. However, the hardest thing to do is that I really wish is that I get to do for Davy is that I wish I get to see him more often like jump on the Red Eye and see him.

My parents would want me to focus on education more than anything, but sometimes it gets so hard, because during school days I would able to hang out with friends a lot but I really wish Davy was around so I wish I can be able to see Davy a lot more than I can.

Just like any other parents house, I still live with my parents, since they are retired I do want to stay at home with them, but at times I want want to live with Davy, but sometimes its so hard, because like I said my parents want me to finish school first than anything in this world.

Things I Love About Being in a LDR

We both love that we get to focus on what we are supposed to be doing. Like for him being able to work every day, while I’m here at school working my butt off to get an BA in Child Science and then going to get my Master’s in Speech.

I send Davy sometimes Care packages, but I love sending him daily emails telling him how my day went. But when we are able to stay connected we would usually Skype with each other, texting a lot, during boot camp we wrote letters every day when I would write a letter every day to him.

Communication is the key to any long distance.Trust is also plays a huge factor. I tell my boyfriend everything and he never judges me and I love how he will tell me everything what he did from the morning, to what he ate, just everything! Communication and trust is everything!

Woah freaky! We’re both J&D’s with a other half called Davy, spelled exactly the same! Good luck with your LDR 🙂