Today we’re happy to share with you the story of Meghan and Rob. They’ve been together for 2 years and are separated by 131.9 miles of distance.

Rob and I first met when we were in 8th grade. I met him after he had a weird on-going relationship with one of my best friends. He was a year older than me, and I never thought of him in a romantic way at all!

We became closer friends and eventually figured out that we liked each other when we were in 10th grade. He asked me out, and I was actually sort of hesitant because he dated my BEST friend and uh, hello girl code? I ended up deciding to try it, with my friend’s approval of course.

She ended up getting annoyed a week into our relationship, saying how weird it was that we were dating, but at this point I was already falling hard for him. From the moment he kissed me, I knew I had done something right.

I‘d been with other guys who weren’t exactly the nicest to me, but this time around it felt like I had found everything I’d ever dreamed about. Rob is my rock and has helped me through some of the hardest times in my life. I consider myself very lucky because not only is he my boyfriend, but he is my best friend. We’ve now been together for 2 years!

How We Became Long Distance

Unfortunately, a year into our relationship I got the news that he was going to be leaving at the end of the summer to go away to Pennsylvania (we live on Long Island).

Saying goodbye to him was a really hard thing for me to do. I felt lost without having him 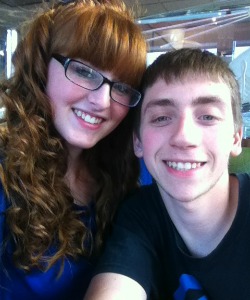 around and I missed being able to cuddle with him on Saturday nights.

It all felt very wrong and in the beginning, I asked myself if I could handle the distance. It was hard at first, but once he showed me that the 131.9 miles between us would not hurt us but strengthen our love, I felt much better.

I hate writing this because there are other couples that are experiencing an incredible amount of miles between them and if I had the money, it would take me 3 hours to get to him so it makes me feel selfish. But even though the distance isn’t as great as the distance between others, I still miss him and it still hurts to have him so far away from me.

How Being in an LDR has Strengthened Our Relationship

When he was home, I took a lot for granted. Our relationship has been through some pretty rocky times, and we were always arguing about something. Not being able to feel his touch as often as I used to definitely made a big impact on me. I feel that I appreciate him and our relationship much more than I did before.

Now that’s he’s away at school, we appreciate the short time we have together and we make sure that it is memorable. The distance proved to me that our love can outlast anything, and I will continue to work hard to keep us strong.

The Hardest & Best Things About Being LD

The hardest thing is not being able to comfort each other when were upset, and not being able to hug and kiss each other or even get to see their smile in person. As I mentioned before, I miss being able to cuddle with him on Saturday nights. But despite all of the negatives, the best thing about being long distance is that it makes us and our relationship much stronger.

Rob and I speak every single day whether it is texting throughout the day, face-timing, posting things on twitter and Facebook to each other or speaking on the phone. The biggest priority for us is to make sure we call each other every night before we go to sleep to say “goodnight, I love you”. That’s the most important thing for us. 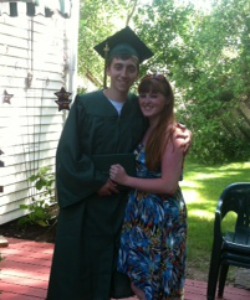 My advice to other long distance couples is don’t give up. Distance makes the heart grow fonder, and once the distance is over you will be so happy you stayed and didn’t give up.

Rob and I recently just celebrated our 2 year anniversary and I am looking forward to spending many more years with him. He will most likely be graduating from school in November and I couldn’t be any more proud of him, but somehow he continues to amaze me every day.

Knowing that we are going to officially close the distance in less than 8 months makes me so excited! If we can do it, you can do it too!

We love to feature the stories of long distance couples from around the world, young or old, new or veteran. If you think your story is worth sharing and if you’d like to be featured on LDR Magazine, share your story with us!

This Couple Met On An App That Wasn’t...