LDRs, Geo-Baching and the Military

This will not come as a huge surprise: many military couples deal with distance quite often, and find it stressful.  According to two surveys from the Institute for Veterans and Military Families at Syracuse University, LDRs and “geo-baching” (short for geographical bachelor) are common among military relationships.  What was surprising was the specific problems associated with military LDRs.

In their 2013 Military Spouse Employment Survey, results showed that 59% of military spouses reported living in a different geographical location than their partner at some point in their relationship.  The most common reason was deployment, but other reasons included maintaining a career, continuing an education, lack of job opportunities in their spouse’s location and family obligations. 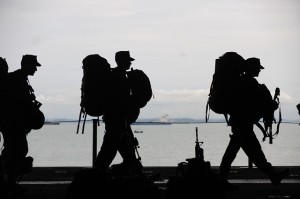 Also notable is that over 50% of respondance reported having careers requiring expensive re-certification fees when they moved with their spouses.  There is also a huge gap in income between civilian military spouses and other civilians, as well as a higher rate of unemployment and underemployment.

All this does take its toll.  In their 2014 Military Family Lifestyle Survey, 40% reported that that spousal employment was an obstacle to financial security. This survey also showed that one in four respondents have geo-bached by choice.

Common reasons were short military orders, the children’s education, the spouse’s career and financial concerns. 39% of spouses reported feeling stressed most or all of the time, and during deployment, child care, household responsibilities and feelings of isolation were common stressors.

You will notice that these studies focused on female spouses.  In the 2014 survey, only 1% who replied were “domestic partners”, and in the 2013 study, male civilian spouses (who accounted for 5% of respondents) and spouses of non-active duty members were eliminated from the results.

Many military spouse support groups, websites and information resources assume the civilian spouse is married, female and in a heterosexual relationship and may even just use “military wife” instead of the gender neutral “spouse”.  Further studies are needed to examine the special interests of these demographics.

Still, the surveys provide us with a snapshot of military life, and is an excellent resource for those considering joining the military or entering a relationship with someone in the military.  It may seem overwhelmingly negative, but all relationships have obstacles and difficulties, and you and your relationship are better for preparing yourselves for issues you may later face.

For those of us already in military LDRs, it is reassuring to know we are not alone, and hopefully the changes recommended by the Institute will be adopted in the future.

When Others Disapprove of your Online Relationship