Hello, my name is Raluca and my SO’s name is Stefan. I live in Romania & my partner lives in Canada. There are 6200 miles between us.

The story of how me and the love of my life met begins in the summer of 2013. We became acquainted over a dating app, while he was visiting his grandparents in Romania. My profile was suggested to him as we were really near at that time and the only thing left to do was to message me.

Unlike messages from other guys on dating sites, the message I got from him was simple and I liked him from the moment I saw his profile. (later I would come to know of the struggle he had with himself on whether to message me or not, and I’m so so happy he did in the end).

As I was just finishing my exams at the time, we exchanged numbers and agreed to meet on a night out to celebrate my upcoming holiday. We didn’t meet on the day we said we would ( I was tired after my exam and cancelled), and normally I would have let go of it, but there was something about this guy, so I asked him out the second time. The night we met was amazing.

I know this sounds cliché , but we “clicked”. Call it love at first sight or how would you, but there was definitely something between us.We ended up hanging out until 10 a.m , going from the bars to the park, and in the end to the Mc Donald’s near my house. How we actually ended up there is another nice story : as he was taking me home with a taxi, I asked him if he would like to spend some more time together , as I really enjoyed being with him. It was the feeling of being so utterly comfortable around someone, I don’t know how to explain it.

Later, he told me that was one of the happiest moments for him, because he didn’t know whether I liked him or not. We didn’t kiss on our first date, I surprised him with a kiss on our second though, that being the time he asked me if I would like to be his girlfriend. It’s been over a year since then, and there’s a lifetime ahead of us. *but a whole lot less of being LDR* Now, a bit over a year apart, my love proposed to me in the same park we spent our first night together in. We’re currently happily engaged, excited to start planning our future wedding and looking forward to our lives together

How Distance Has Shaped Us

Being in a long distance relationship has been hard on both of us. It’s not just that you don’t get to be with them at all times and do all the things couples usually do , but the fact that you see other people have it so easy and don’t appreciate what they have.

If there’s anything this long distance taught us, it’s to appreciate whatever time we have with one another, to communicate better because when we argue we can’t fix it with a hug and a kiss, we have to talk it out; to have trust in one another, regardless of each other’s past.

At times, long distance brought out the worst in us, but we’ve always pulled through , and every argument we had in the long run made us stronger. I think being long distance helped us get to know each other a whole lot better than we would have if we would have been together all the time, because by not having the person you love near, there’s not much you can do but talk. I’m grateful for that.

Obstacles We’ve Faced Through The Distance 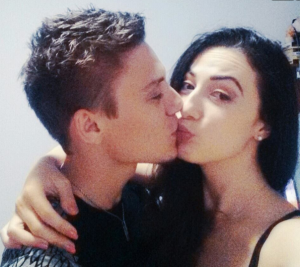 The biggest obstacle we faced in the beginning was the disapproval of friends. No one believed this would work, even though they didn’t know much about the other person. The worst part was them encouraging cheating, as the other will never know. Fortunately, our love for each other was stronger than what they thought and in the end we surprised everyone.

This to me is the hardest thing to cope with. Because you get used to doing even the littlest things with them, and you take them with you everywhere, so when they’re gone all that’s left is a big hole in your life. It’s not easy to go back to skyping all day, when 24h ago you woke up together cuddling. But we try and consider the memories we have as reminders of how our life will be when we finally close the distance.

Things We Love About Being In A LDR

The love we have for each other is more profound, as it does not rely on physical things only, unlike other couples’. By being so far away from one another we got to know each other a lot better, we learned to overcome our communication problems, we learned to appreciate every little thing we get to do with our significant other.

Our Advice To Other Long Distance Couples

Don’t give up on this. Things get so hard at times and it just feels like you can’t do it anymore.. but you can ! Remember why you committed to them in the first place, remember all the reasons that make your love worth fighting for !

To sum it up, here’s what me and my love tell each other whenever things get bad : “I’d rather have it hard with you, than easy with anyone else.”