Are You Using These 7 DUMB Excuses To Stay In Your Crappy LDR? 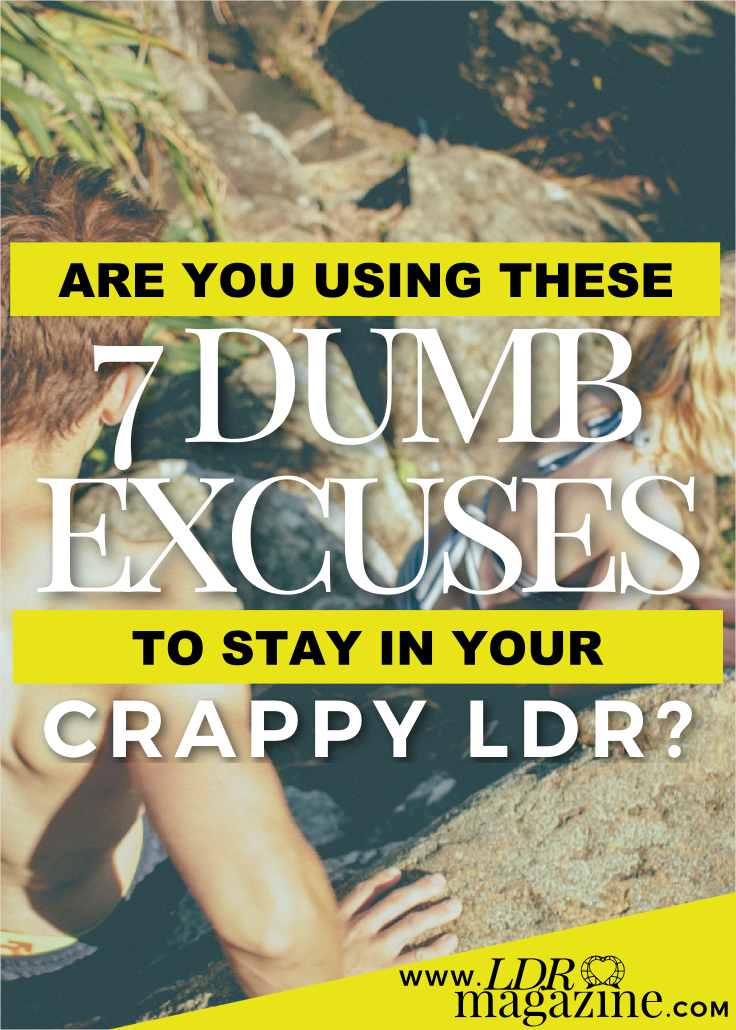 We’ve all seen it before, that one couple who clearly has some huge relationship issues. Maybe they’re that couple that argues all the time, or the pair who are always dealing with some kind of long distance jealousy issue. The crazy thing? They don’t even seem to realize their relationship is borderline dysfunctional.

Some couples aren’t that bad though. A crappy LDR isn’t just caused by arguing or jealousy, it can also just be a general sense of unhappiness that you feel without really being able to pin point it. It can be a dissatisfaction with the relationship or even your partner, without ever really openly acknowledging it to yourself.

It’s hard coming to terms with the fact that your relationship isn’t what you want it to be, or that it’s changed for the worse. No one wants to let go of their one true love, but sometimes we’ve gotta face the music. Maybe you’re just in love with the idea of your relationship now, instead of how things actually are. Maybe you might even justify why your relationship is worth saving because you just don’t want to let go & be alone all over again.

Here are 7 excuses we need to STOP using to justify staying in a toxic, crappy and unsatisfying long distance relationship. Do any of these reasons sound familiar to you?

1. Our relationship is special because of how we met.

While being in a long distance relationship and having a really neat story behind how you met is fun & exciting, it’s hardly a reason to hang on to a toxic or unsatisfying relationship. The story of how you met, is just that -a story. And that story is still something that will remain a part of your life whether you break up or not because it happened to you. If you’re hanging on to a relationship because you have a fun or interesting tale to tell, then maybe it’s not your partner you’re really in love with.

“Only true love can survive distance” As an LDR couple I’m sure you hear and see quotes like that all the time. And maybe it gets you thinking: if my relationship ends then we didn’t have true love and we failed. I’m here to tell you: Screw that. Relationships end for all kinds of reasons and just because it fails does NOT mean that you didn’t have true love while you were together.

It also shouldn’t be taken as a personal failure to end a relationship in any instance. Don’t stay in a relationship because you want the novelty of surviving an LDR, there are much worse things in life than not beating the distance and your happiness is far more important.

3. We’ve been together/known each other forever

It’s great to have a lengthy relationship with someone, but that’s hardly a good reason to stay in a relationship. Just because you’re comfortable with someone doesn’t mean you’re romantically compatible too. And while you may have known them for ages, it’s unrealistic to expect that you would remain compatible your boyfriends/girlfriend forever. Sometimes having history works for a romantic relationship but sometimes it just doesn’t. After all, there’s nothing wrong with keeping that history, being just friends & pursuing other romantic possibilities.

So your partner has committed to a long distance relationship and everyone who is anyone knows they are hard. Maybe they had reservations about dating over a distance and you had to convince them to stay in a relationship with you and now, suddenly, you’re just not feeling it anymore. But the guilt, oh the guilt is keeping you from breaking things off.

The facts: LDRs are just like any relationship, just with some space added in between you. So sometimes, like with any relationship, things will fade off and one person just won’t be interested anymore. If the only reason you’re hanging on is because you feel guilty about breaking it off from miles away, you’re just strangling your relationship slowly rather than giving it a quick end. Eventually your partner will feel something is off as you slowly drag things on and that’s time wasted on unhappiness when you could both be out finding your own happiness.

5. They’ll grow up/change eventually (or when we’re together)

Everyone is flawed and no one is perfect, so it’s okay to recognize that your spouse may not be the most perfect person in your book. That’s cool and dandy. But if you’re sticking with them only because you think they’ll grow up or mature or change something down the line, you’re only fooling yourself.

If your long distance girlfriend or boyfriend has some serious flaws that you think will be cleared up once you’re together -guess again! People are who they are and distance shouldn’t be a determining factor in if your boyfriend is supportive to you or not, or if your girlfriend is flirty or not. If you’re staying in your relationship because you think your LDR partner will suddenly change later once you’re together, you’re in for a very rude awakening.

7. I’ll be depressed/sad for a really long time

The aching sadness that comes with a break up is so heart wrenching for some people, that they’d rather just stay in the relationship to keep from feeling so badly. It’s almost like you’re subjecting yourself to low, constant levels of misery rather than just biting the bullet and getting it over-with in one fatal swoop.

Sure, you’ll be heartbroken and eat lots of cookie dough and reconnect with your BFFs Ben & Jerry, but I can promise you the sadness won’t last forever. The length and severity of sadness is different for everyone, but it will go away if you can just hold on and work your way through it. In the end, sadness is just a feeling and holding on to a relationship to avoid it, is just not wise.

Do you agree with these excuses? Did we miss any? Share more reasons with us in the comments below!

What We Love About Long Distance Relationships