How We Decided to Close the Distance

One thing is dealing with the separation. Learning how to ease the pain of being apart and accepting that you are in a long distance relationship. Another thing is taking the leap and actually decide to eliminate the distance and live together.

Most people in a long distance relationship wish they could erase the ‘long distance part’ and just be in a regular old relationship. You don’t care how amazing it sounds when you tell your friends about the romantic few weeks you spent together or the beautiful letter your partner wrote you. If it were up to you you’d skip the drama and be in a normal relationship like everyone else – one where you can wake up in the morning next to your love without cursing the sunrise for making the departure date come closer.

My boyfriend is American and I am Danish. We traveled 5000 miles back and forth for a year just to be together. There were so many beautiful stories to tell about the occasional times when we got to spend a few weeks together. It felt amazing to get off an airplane and run into his arms. But there were also too many last days, dwindling hours and crying goodbyes.

[pullquote align=left]
“I wrapped myself around his body, fighting the dawn of that last night. First desperately and fiercely and since apathetically and limply when the hands of the clock refused to halt in spite of our whispering declarations of love and promises of more hours.” (Chapter 1 – Sweet Distance)
[/pullquote]

In the end it was just too painful. Every time we saw each other it became harder to be apart, and every time we crossed the Atlantic we were less able to afford another flight ticket.

One day we were sitting by Ladybird Lake in Austin, Texas where Alex lived at the time. During one of our intense conversations we started discussing the Neil Young lyric:

“…Tell my why is it hard to make arrangements with yourself when you’re old enough to repay and young enough to sell?”

Facing the fear of sacrifice:

Obviously there is a reason that every LDR relationship is long distance in the first place; something is keeping us apart. For some couples it is simply a matter of time; a matter of enduring the distance until an education or an internship is over. For others it is about saving up money up for the plane ticket. And then again for some it is simply about “belonging” to two different worlds and not wanting to sacrifice what it takes to compromise previous lives.

[pullquote align=right]
There was a question in the air: “How much do I love him?” And an answer: “More than anything.”
[/pullquote]

We were sitting by that lake and realized we were of the last kind. What held us back was unwillingness to give up our previous lives out of simple fear. We had jobs, apartments and families. We had safety and progress. Safety in being where we’d always been: surrounded by familiar faces. Progress in having mediocre jobs that could potentially take us somewhere. But take us where?

There was a question in the air: “How much do I love him?”

And an answer: “More than anything.”

The fear vanished and I realized that the truth in those words was my final answer: I was willing to give and give up anything to be with him.

Dealing with the doubt:

Then there’s the doubt. The fear that even if you give up your job or life savings to be together it won’t work out on the longer run and you would lose everything. ‘What if I do it and he turns out to not be what I expected?’ This is the fear that keeps a lot of LDR couples from each other. The price is simply too big to take the risk of breaking up.

Again, I approached this dilemma by objectively analyzing my options, and here’s what I figured out: 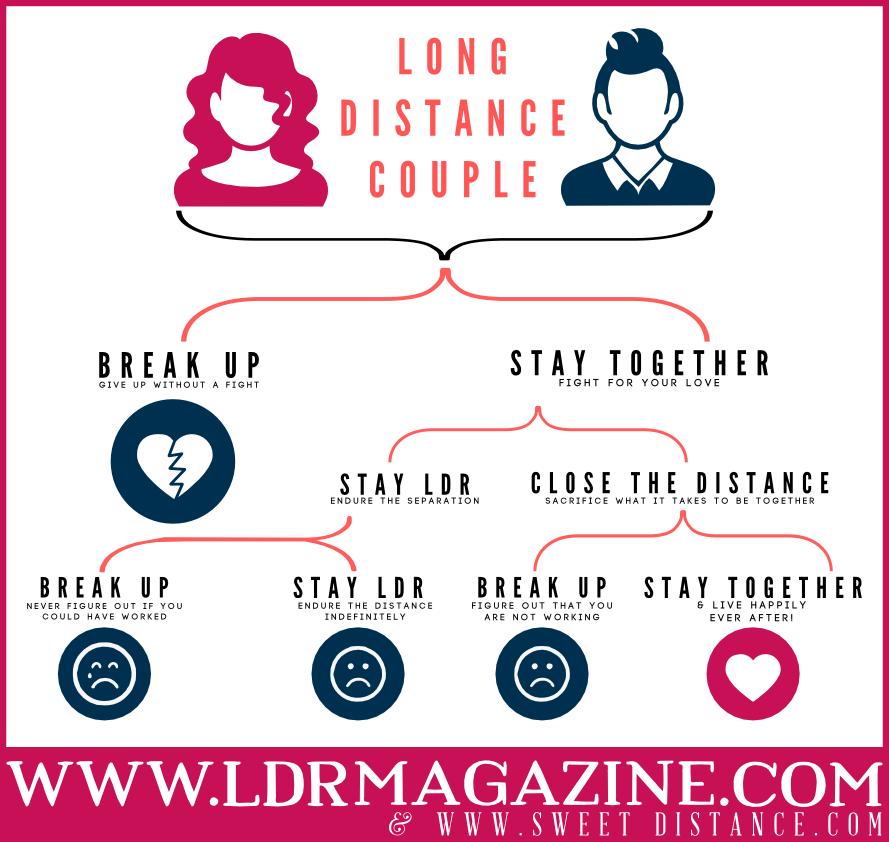 Looking at this flowchart, at the time scribbled on a small post-it, I made my final decision. If I didn’t pursue Alex above all I would forever regret it, and the only way I could get a shot at real happiness was if I took the chance. I would rather take the chance and be disappointed then not take it at all.

So, having conquered the monsters of sacrifice and doubt we decided to run away together. With the VISA laws in our relative countries it is not an option for us to just move to one of our homes. As a result we packed our backpacks and at the end of July 2014 we left for indefinite travels.

I know this is not a final solution; at some point we’ll have to make the next decision about how and where to settle down. But for now we are together, living on the road, spending less money per month than when we were not traveling (thanks to AirBnb!).

We are trying to make a bit of money here and there, developing our website and working online as well as saving every dime we can. We don’t know when we’ll see our families again. We are wearing the same 4 outfits over and over. We share bathrooms and kitchens with strangers and live off of chorizo on toast. But I can tell you in complete honesty, so far it has been worth every single sacrifice and I am happier than I could have ever imagined.

Alex just reached out to me as I am sitting here typing on my laptop. He is next to me in a comfortable green couch. We are in a crowded coffee shop in Lisbon and the WIFI is bad but the atmosphere is amazing. “You are so far away,” he says with a tortured expression while touching my arm.

He is working as well and we haven’t talked for an hour or so. “It feels like you’re a mile away even though you’re sitting right next to me.” Smiling at this statement, having just written the above, I lean in to kiss his cheek and answer in a soft voice “at least it’s not 5000 miles…”

5 Ways to Keep Your LDR Interesting

Positive Aspects of Being in an LDR

5 Tips for Getting Ready to Close the...

Both of you are very lucky to have each other, and you made the right choice of finally closing the distance. It is all worth it, isn’t it? 🙂