1. The distance will get the best of you.

There were days when all I could see was the distance between me and him. That’s okay, distance is hard, it’s like the invisible elephant in the room that you’re trying to ignore every day. Some days that elephant steps all over you. Doesn’t matter, as long as you get back up after the trampling and keep moving forward.

2. You are Epically Brave

I didn’t get into an LDR willingly, it just kind of happened. I loved him so much that it wasn’t an option to NOT become long distance. Everyone knows that LDRs are hard, so the fact that you even decided it was okay to be in one means that you are incredibly brave and fearless. Brave enough to trust and love someone from hundreds or thousands of miles away. Remember that on those down days.

3. Patience is a Virtue

Ask my boyfriend, I’m the most impatient person on the face of the earth. Yet, somehow I was able to wait 6+ years for him in a long distance relationship. If you don’t have patience, get ready to develop some because LDRs really force you to develop a waiting attitude.

4. Distance will cause arguments.

At least in the beginning of your long distance relationship. We don’t argue at all anymore, but there were those moments when distance really got the best of us. You can get so frustrated and feel so deprived of your partner and the things you want to have together, that you’re both just cranky and irritable and an argument can erupt out of almost thin air.

5. You have to pick your fights wisely

Distance is already hard, and some fights really aren’t worth it. We had to learn pretty quickly that some things that bothered us had to be over looked (rather than confronted) because distance puts us in a unique situation. So if your SO doesn’t text you back for 3 hours, it’s probably not logical to get upset over it when you have literally no idea what’s going on on the other side. You have to decide is fighting for this one thing is worth giving each other the silent treatment for 3 days or erupting into a big argument over it, or not.

My boyfriend and I have different lives, with different things going on. So in the process of being long distance, we’re also struggling to make time for each other in our own schedules. You might think it’s not that hard, right? You might think it’s as simple as going out for a coffee date as if we were together. But the reality is that it’s actually sometimes harder to create a time space when we can be together. Especially if you’re a couple that has to deal with time zones. Suddenly time spent together because a real valuable commodity, because you both don’t have the luxury

7. Distance will make you super close

I can say I know more about my SO than I’ve ever known about any of my previous SO’s, because distance is more of a meeting of the minds than just a physical relationship. Even if you’ve never met, you can get to know your SO like the back of your hand and in a way that no one else in their lives may know them. Distance makes you want to be open with each other, because talking is literally the best way to stay connected.

8. You will get jealous

I don’t consider myself a jealous hearted person. In fact, I can count on one hand the number of times I ever felt jealous over something someone else had in my entire life. I just don’t really care what’s going on in other people’s lives, until distance that is. Now, I get a little tinge of jealousy when I see other couples together. Even REALLY old couples. Suddenly that trip to the grocery store turns into a sea of couples holding hands and making goo-goo eyes at each other. Did I never notice that before or is this some sick twist of irony?

9. You need to send your SO selfies

My boyfriend says he learned that taking pictures and sending them to me frequently was a great way to brighten my day. And I agree! “One day it really dawned on me just how happy you got when I would randomly send you a picture.” It may seem silly to some, and it was silly to him at the time, but to have that visual reminder of the person you care about throughout the day is just… amazing. You may reason that it’s “just” a picture. But it’s also a great way for your SO to get a glimpse of you in your everyday life and a smile on their face is worth a selfie isn’t it?

10. You need to use your words

Have you ever gotten angry at your SO because they didn’t seem to notice you were upset about something, or expected them to do something and they didn’t do it? I was guilty of this. The thing is; distance means that your partner can’t really get those normal, non-verbal cues from you. I mean, you can use all the emoji’s and *text actions* that you want; it’s still not the same as a non-verbal cue. Our partners can’t read our minds, so instead of hinting at what you want and getting upset when they don’t catch it: just be straight forward and tell them!

You need to make a resolve and a decision every day and every night to stay in your LDR and make it work. It’s NOT a one-time decision. You’ll have ups and downs, good days and bad. But as long as you always have that determination, and you make a conscious effort and decisions every day to stay loyal to your long distance love, you can make it through to the end.

12. You’re awesome on your own

Being long distance teaches you self-worth! It means that YES you CAN go to a movie theater alone, and YES you totally can survive as a pseudo single person. No, you don’t need another person to survive (though it would be super nice if they were here right now.) You and your SO will grow individually while together and then when you finally are together, you’re not two halves –you’re two whole people coming together to form this super amazing, boss relationship pair.

13. Have a plan or series of plans

Please, please don’t do what we did. We went a long time without a plan for ending the distance and honestly it wasn’t until we came up with a plan for how we were going to get it all to stop that we actually started making progress towards being together. Being together DOES NOT COUNT as a goal for LDR couples, because it’s just an inevitable final result (aside from breaking up.) You need to have other little steps and goals that you’re working towards. Don’t just say “we want to close the distance” but then have absolutely no plans or steps to do so. It’s relationship suicide.

Don’t ever get settled into the idea that being long distance is okay, or normal. It’s not. It caused me a lot of emotional turmoil and I probably shortened my life by a few years just from the worry. A healthy, normal relationship is when two people can be physically together. Having said that, there’s nothing wrong with long distance relationships! Just think of it as a detour on a road. It’s short-lived and just gets you to that final destination: togetherness.

Letting your fears and insecurities eat away at you is a very fast route towards unhappiness and fighting in your relationship. As our relationship grew stronger, we realized how important it was to fully trust each other and how much happier we both were once we realized that we DID fully trust one another. It was like a weight was lifted off our shoulders and it helped our LDR immensely.

It’s not just a quote, it’s a truth. While distance is hard, the struggle you face together makes you love each other more. You know that your SO loves you endlessly because they were willing to do a long distance relationship just to have the chance to love you.

What have YOU learned from being in a long distance relationship? 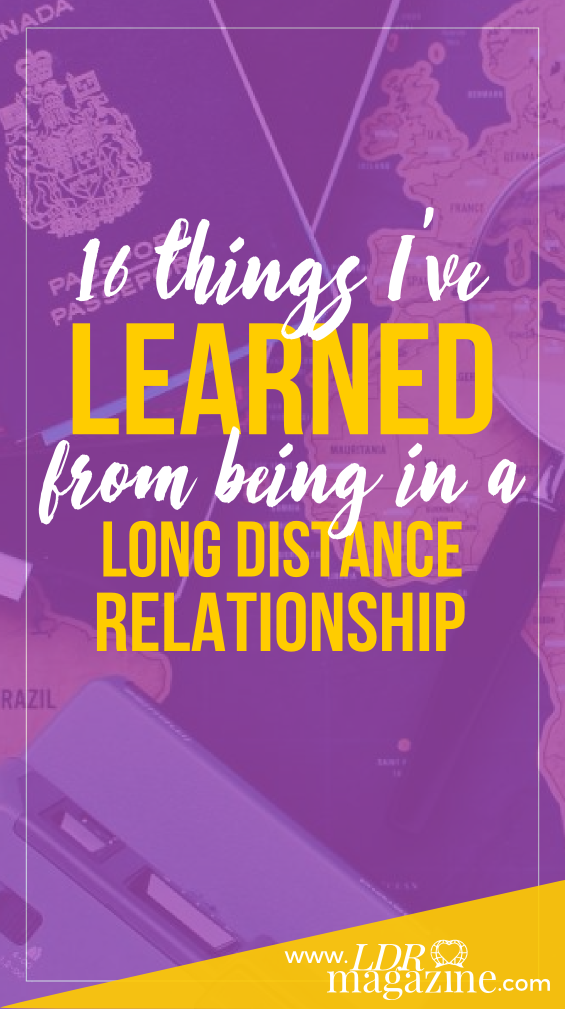 Hard, but not impossible! 😉

How To Succesfully Navigate A Long...