Hello! My name is Susan & my partner’s name is Bill. I live in Angers, France & my partner lives in Cape Girardeau, Missouri. There are 4,360 miles between us.

We met in high school freshman year, but we really never got to know each other until the summer before senior year. That June, we both went on a trip to Washington D.C. with our high school band, and that’s when we started talking to each other a lot. After the trip, we began seeing each other, and by the end of the summer we were constantly texting and hanging out on an almost daily basis. That October, we officially started dating.

We both decided on the same college, Southeast Missouri State University. One of my majors is French, so it was basically required for me to do a semester abroad (not totally, but my degree would be pretty much worthless otherwise), so we knew from the start that I would be gone for a whole semester at one point. During the summer of 2012, I did a month of studies in France, which gave us a little taste of what we would have to go through one year later. 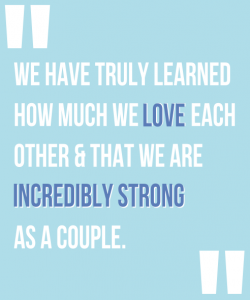 I ultimately decided to spend my entire junior year in France with our school’s exchange program. It was a very difficult decision for me, but many people told me that I would learn so much more this way, and that one semester really just wasn’t enough.

I do not regret this decision at all; in fact, I know we are stronger because of it. Bill has been so supportive of me in every way, and has always been here for me as much as possible. We have never even considered ending our relationship. Breaking up was never an option for either of us.

When I left the U.S. in August 2013, we had been dating for almost three years, and this marks almost four. By the time I am back home at the end of May, we will have been apart for over nine months!

We have truly learned how much we love each other, and that we are incredibly strong as a couple. Of course I knew I loved him before I left, but I had no idea how much he truly meant to me. We truly realized that our relationship was far more than physical.

The fact that we can be apart for two semesters and still be as strong and invested in each other as ever has made our relationship worth even more for both of us. We have not always been able to skype very often, sometimes going a week or more without even talking to each other. But in the end, we both know who we belong to. True love does not require physical presence.

Obstacles Distance Has Presented Us With

Our biggest obstacle started even before I left, with our friends telling us we would never make it, one year was too long, we would find other people, etc. People definitely doubted us, and this was hard to deal with, especially coming from some of my best friends. They just did not understand why I wanted to be “tied down” while I was living in Europe, but I never saw it that way. I would have waited five years if that was what it would have taken. People who have never been in a long-term serious relationship just can’t understand this.

And obviously, the whole not-seeing-each-other-for-2-semesters thing was a little difficult, but you just learn to live with it. Calling and texting are far too expensive overseas. Of course there is Skype and Facebook, but my internet here in France in the student residence is very choppy, and often too slow of a connection to Skype at all.

Being seven hours ahead of him was also quite inconvenient; sometimes our schedules just did not allow for talking to each other. This made it totally miserable at first, but we just learned to deal with it. We would send each other letters in the mail, and once he even sent me a whole box full of Valentine’s Day chocolate! There are so many little ways to communicate, some not even involving modern technology. Sometimes you just have to get creative.

What We Love About Being in a LDR

To be honest, there isn’t a whole lot I just adore about being so far apart in the moment, but in the long run I know we have learned a ton of invaluable lessons. For example, we have discovered that physical contact is not the most important thing in a relationship, and is actually pretty far down on the list. Some couples never learn this until it is too late, and discover that they really are not that compatible at all. However, we learned just how compatible we really are, and how much each of us truly gets out of the relationship.

We often use Skype, but this doesn’t work out as well as we’d like for it to. Almost every night, we both leave messages for each other on Facebook (texts/calls are too expensive) so that the other one wakes up to them the next morning. We also do it the old fashioned way and exchange letters through the mail! Really, you just need to make sure you are up-to-date on everything that is happening in his or her life, and never go more than a couple days without talking to each other (if possible).

Our Advice to Other Long Distance Couples

DO NOT let others discourage you. Even if they mean well, they really just do not understand your situation because they’ve never experienced anything like it before. Someone who tells you that time apart is not worth it has obviously never been truly, unconditionally in love with another person before.

Also, never get lazy and expect your significant other to always be the one to contact you. Just as in regular relationships, you should both initiate communication with each other equally. At the same time, if you know that your SO is very busy or unavailable for a certain period of time, do not try to make him/her feel bad for not talking to you.

I know you might be lonely, but if he or she warns you ahead of time that they may not be able to talk, respect that. It most likely is not his or her fault, and just keep in mind that you may be in a similar situation later on down the road. My suggestion for times of loneliness like these is to write your feelings down in a letter and send it to your SO, or a Facebook message, text, whatever works.

And of course, get out and get some fresh air, do things with your friends, and don’t sit around and be miserable all day. I know I had bad days, but don’t let missing him/her ruin your life! Try to be as happy as you can, and just be grateful for the love that you have with this person.

Trust me, the distance is worth the wait!